Holidays in Iceland in June

Visiting Iceland in June is a wonderful idea. At this time of the year, we have almost 24 hours of daylight. Everything is green and the flowers are in bloom. It is one of the warmest months of the year and has the least rain. June is also a great month for watching wildlife in Iceland and we highly recommend adding a whale watching tour to your travel itinerary. Iceland is considered to be one of the best places in the world for whale watching and especially in summer we have a variety of different whale species to observe in the waters around Iceland.

Whale Watching from Ólafsvík in June

Ólafsvik is the only place in Iceland where orcas (killer whales) are regularly seen on whale watching tours. On top of that, June is also a great month to see them. In June 2019, the weather allowed us to operate our whale trips on 21 days of the month. On 16 out of these 21 days, we were able to observe orcas on our tours. So if you want to see killer whales during your stay in Iceland in June, we highly recommend adding Snaefellsnes to your itinerary. This area of Iceland is not only famous for the orcas but also has much more to offer. Read more about it on our Snaefellsnes blog.

But June is not only good to see orcas in Snaefellsnes. The bay is usually full of life and we often see different species on a tour. The most common whales we see in June are minke whales, humpback whales, dolphins, and also sperm whales. Last year we even saw a blue whale on one of our tours from Ólafsvík.

Whale Watching from Hólmavík in June

The bay around Hólmavík is famous for its calmness and also known to host a lot of humpback whales during summer. We usually start our tours from Holmavik at the beginning of June. At this time of the year, it is usually still relatively quiet in the Westfjords. Thanks to that, you can expect a very unique whale watching trip in a small group usually with a lot of space on our comfortable boat. The humpback whales are famous for their acrobatic behavior. On our tours from Hólmavík, we regularly observe them breaching out of the water or slapping the water with their flippers and flukes. In 2019, we also saw from time orcas and also minke whales in June.

All photos in this article were taken by our whale watching guides in June 2019. Learn more about our whale tours available in June by clicking the links below. We also regularly post photos from our tours on our Facebook page and on Instagram. 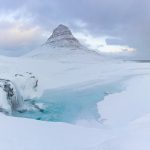 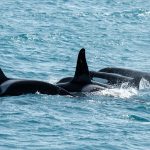