Iceland sits just shy of the arctic circle. Its northernmost land point, Hraunahafnartangi, lies 66.5°N, peering 0.5° into the polar region. Here on the Snæfellsnes peninsula, even with summer in full swing, the mountains sit necklaced with snow, the nearby icecap gleams sleepily in the midnight sun, and arctic poppies burst into great papery blooms. Brisk sea breezes cool the rising heat, and soon the moss-clad hills will be peppered with wild blueberries.

It’s a world away from the sweating heat of August in the Azores. Nestled in the North Atlantic between Portugal and the Americas, it’s hard to imagine that such a distant chain of ocean-bound islands, replete with turquoise lagoons and subtropical plants, could have anything in common with Iceland’s cerulean seas. And yet, it is precisely the sea which connects them.

Watching Sperm Whales in Breiðafjörður is a unique experience. It is not difficult to understand why these enormous ocean travellers have historically captured the poetic imagination. With Nordic manuscripts baptising stretches of the North Sea the ‘whale path’ (Hron-rād) or the ‘whale’s way’ (hwæl-weg), Norse poetry has managed to capture some of the perpetual motion, the great migration essential to sperm whale populations. Here in Iceland, male sperm whales arrive en route to their northernmost feeding grounds. Leaving the smaller females and their young to hunt in their southern habitats, the males go in search of nutrient-rich waters. On average, male sperm whales reach sixteen metres in length. As toothed whales, they are earth’s largest hunters. Foregoing a usual diet of giant squid, here they appear to feed on local varieties of fish, eager for their gargantuan bodies to swell to their fullest proportions.

In March this year, Láki Tours’ resident naturalists Karl O’Neill began an exciting project. Collecting together photographs of sperm whale flukes, the identities of many of our cetaceous summer visitors were placed into a comprehensive ID catalogue. With a detailed, geographically tagged record of where and when we had encountered these sea giants over the past four years, the exciting work of tracking our sperm whales across the Atlantic Ocean could begin.

Before long, the catalogue produced exciting results. Collaborating with marine scientist Lisa Steiner, Láki Tours was able to establish an ID match with a sperm whale spotted off the Azores coast, giving us confirmatory evidence, in at least one case, of a 3,000km migration route, stretching from the Mediterranean to the icy sub-arctic.

Sperm Whale Migration between Iceland and the Azores 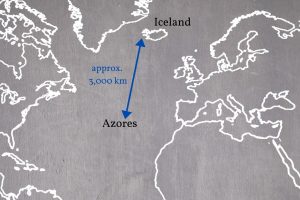 Although almost ten years had elapsed between the two pictures, Steiner and Futurismo Azores were clearly able to identify the whale, suggesting that ‘this match aligns with existing ones between the Azores and Norway’. The significance of this discovery does not simply come down to expanding our knowledge of Sperm Whale behaviour – an ever-increasing field – but bears true testament to the exciting nature of scientific research in the twenty-first century.

The ease of international collaboration opens up fantastic educational opportunities, allowing information to flow from long-established scientific epicentres to places on the peripheral frontiers of cetacean research.

We hope to continue to build our knowledge of the many beautiful creatures that pass through our waters, bringing their rich stories to anyone who chooses to whale watch with us in Western Iceland. 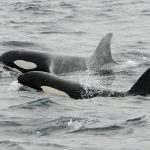 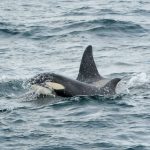