“As for me, I am tormented with an everlasting itch for things remote. I love to sail forbidden seas, and land on barbarous coasts.”– Herman Melville

It is a pearly, overcast day in mid-April. The pewter sea sits calmly beneath a heavy sky, shrugging its grey-blue shoulders in a long, off-hand Atlantic swell. To the west, the mountains bare their steep, snow-clad throats to a cold northerly breeze. Standing at the bow, the fjord drifts past, landmarks shrinking and re-emerging as great mountain chains. Overhead low, matte clouds seem ready to shred into a fine filigree of fresh snow. Slicing through the waves, Irís foams at the nose, her inky-white wake eyed up for fish by passing fulmars. Light spray flecks the front deck, freckling cheeks and sunglasses. A throng of passengers, muffled in blue overalls, peek over the side, cameras poised, every inch of skin swaddled, protected from the wind-chill. The day looks promising.

In the snug of the wheelhouse, amidst worn chairs and endless spare overalls, laminate charts and the smell of fresh coffee, an air of quiet anticipation spreads amongst the crew. The low buzz of the microphone announces the start of the tour. We listen to the garrulous rumble of the coffee maker, the low boom of waves slapping the bow, the charming creak of the many wood-clad maritime accoutrements.

Once underway, talk soon turns to whales: sightings, species, the latest cetacean science-bibles. With the GPS plotting our position, the digital chart tracks the seabed, etching out depths and contours in neat staccato lines. In the open water, we make way towards the drop-off, sliding over a shelf that, at its deepest, sinks suddenly to 370 metres. Out in the deep zone, nutrients stirred up from the seafloor support a rich, interlocking life-system: a vast feeding ground inviting all kinds of coastal creatures to its well-stocked table.

Here, the search for Iceland’s sea giants can begin in earnest.

Beneath a weak sun, the sea turns oyster-white. Through our binoculars the horizon bobs and pitches, gannets dive, storm birds trail their wingtips through great skating waves. Before long, in the distance, great fists of steam appear on the water’s surface, dispersing slowly, suspended in the demure light. Perhaps three at once. The boat accelerates: the bursts of wet cloud persist. The passengers notice the change, get to their feet and hug the handrails, staring expectantly at the middle-distance.

We have spotted sperm whales: deep-sea leviathans that wrestle with the giant squid, echolocate across hundreds of miles and migrate as far North as the frozen waters of Svalbard. They are the world’s largest and loudest predators, producing clicks which, in close proximity, can shatter the human body. They reach up to twenty metres in length, sporting a slender toothed jaw, a ridged, muscular tail and a sleek fluke cross-hatched with scars and scratches, bearing testimony to each of their subaquatic struggles.

Watching them would give you little idea of their colossal power. Unlike the splash, paddle and blow of our regular killer whales, the sperm whale has nothing to prove. Expert divers, they breathe-up at the surface to prepare for a great sink. Their long blows puff gently, lingering, massive before they make a clean, swooping descent. Catching sight of detached articles: a nose, a shower of breath, the curving dive of a dorsal fin, or the crescendo of a tattooed fluke, you’re left with a mosaic-image – a whale as the sum of its briefly glimpsed parts.

A hush falls amongst the passengers. Silently they watch the vast, grey bodies surface, holding their collective breath as the whales gulp down slow lungfuls of air. The crew calmly announce changes of position. Cameras rattle off nervous, excited shots. The whales wait at the surface, rolling side-on to the swell, in no great hurry. When the final dives are eventually taken, three flukes flash above the water like brilliant flags raised in salute, graciously descending with their great, grey-blue ships. The whales sink back into the depths. Slate waves close over them. Nothing but dispersing seafoam, and the slick of a few torn fluke prints, suggest they had surfaced at all. The sun shrinks behind lowering clouds, and a fine drizzle begins. Excited chatter starts up again. Passengers swing around to catch one last look, then settle back into their hoods. They compare photographs, talk excitedly amongst themselves. At this time of year, many of them are keen whale watchers, swapping stories of other species, other places, other seasons. Most of them are simply curious. What do the sperm whales eat? Why are they here? Where do they come from?

The microphone crackles into life:

“Sperm whales are incredible divers, capable of holding their breath for over an hour, descending to depths of over one kilometre. Little is known about what sperm whales feed on in Northern waters. It’s likely to be fish, rather than cephalopods. Best guesses land on cod, lumpfish or Greenland halibut. The sperm whales seen here are all male. They need to migrate north in order to take in enough nutrients to reach their full size, leaving the females and calves to feed in southern seas. In at least one case, the sperm whales in Iceland migrate from as far south as the Azores. They navigate by means of a huge, lipid-filled cranial cavity – that distinctive great, square head – which allows them to concentrate the volume and direction of their echolocation calls.’

As the talk continues, the boat slowly turns away. I tuck my chilly hands inside my sleeves, and marvel to think of grey ocean giants, swimming off into the vast and darkening deep. 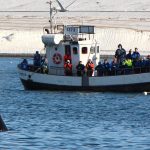 Why You Need to Take a Boat Tour in Snaefellsnes

Top 10 Things to Do in Grundarfjordur Iceland – Town Next to Mt. Kirkjufell